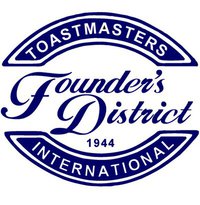 Last Saturday was April 20, 2013 and I attended the Founder’s District annual Spring Conference. We were treated to 8 entertaining and educational speeches from which I learned very much. Here are the 6 key lessons I took away from the eight speeches:

As I was to give a 2 minutes speech during the conference as part of the process to have me elected as Division A Governor, I also learned a good method to craft a short speech based on the audience type. I had visualized the speech prior to the conference, but until 2 hours before I spoke, I had not figured out the right words I was going to use to get the result I desired. In time the words came and they came out well. I will share the process in a subsequent post.

If you care to know, I lost the election, but I gained an invaluable and priceless experience. The icing on the cake was making history by having a ballot draw between myself and the other candidate. The draw led to a second round which I ultimately lost, 80 to 110. One of the lessons I learned from my candidacy in that election is this: Never let your inexperience get in the way of your ambitions.

The conference was a massive success and the food was good too. I met new people and established a few new connections. I am looking forward to the next Founder’s District conference, which I will definitely attend.